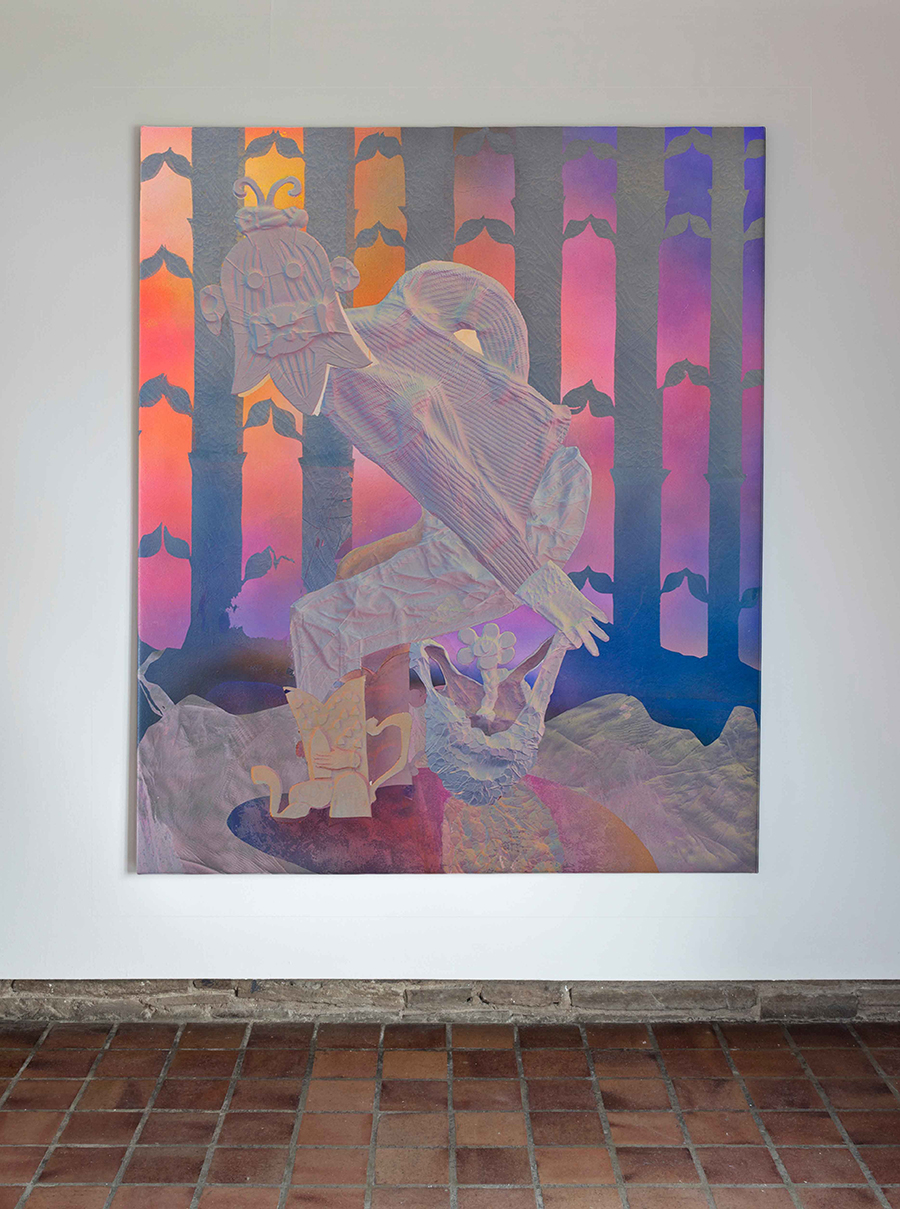 If you were to walk into one of our summer camps, the noise level might take you by surprise. While we often think of art as a quiet or introspective activity, our approach to artmaking with kids is anything but tranquil. 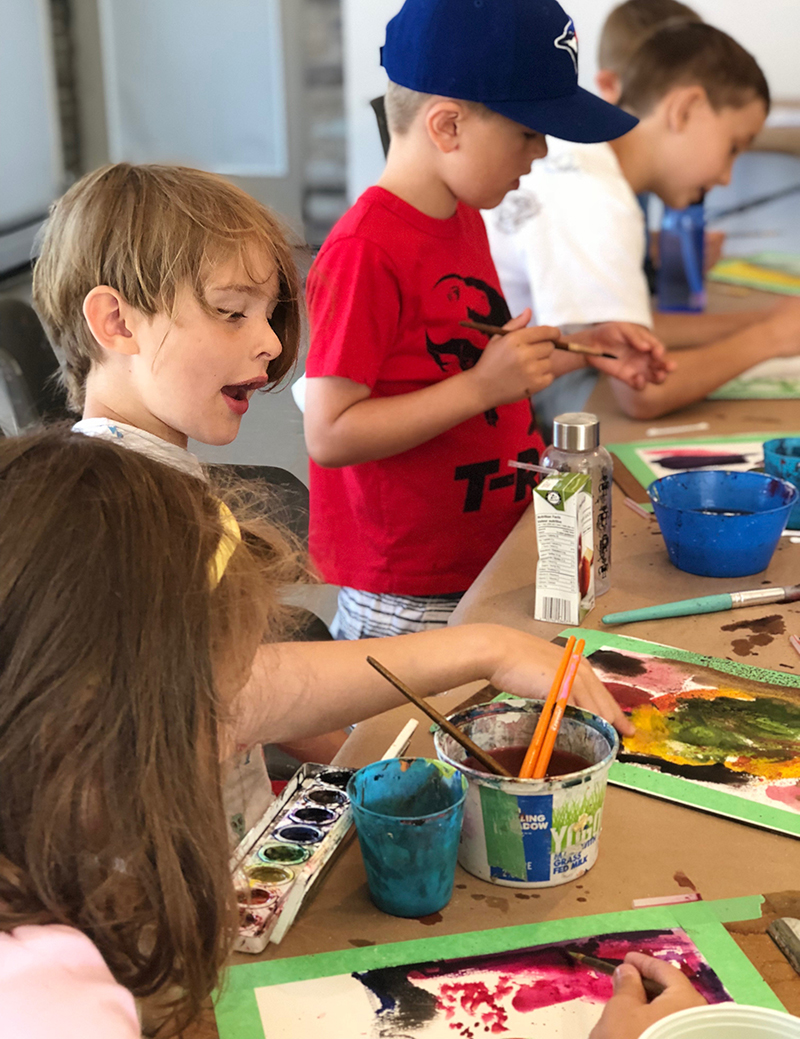 Pablo Helguera—a New York-based artist and the Director of Adult and Academic programs at MoMA—has said that education should be about emphasis on process, on dialogue and exchange, and on human relationships. While he probably didn’t have kids summer camps in mind when he said this(!), it’s an idea we take to heart.

In all of our education programs—summer camps included—our educators strive to encourage exchange between participants: about art, about their own creative ideas, and about the world as they see it. Our programs focus less on the outcome and more about the process along the way—building a chatty environment is a big part of that, not only to foster participants’ confidence in their creative thinking capacities, but because without this exchange, as Helguera reminds us, art simply can’t exist. As we like to remind parents, a little raucousness goes a long way! 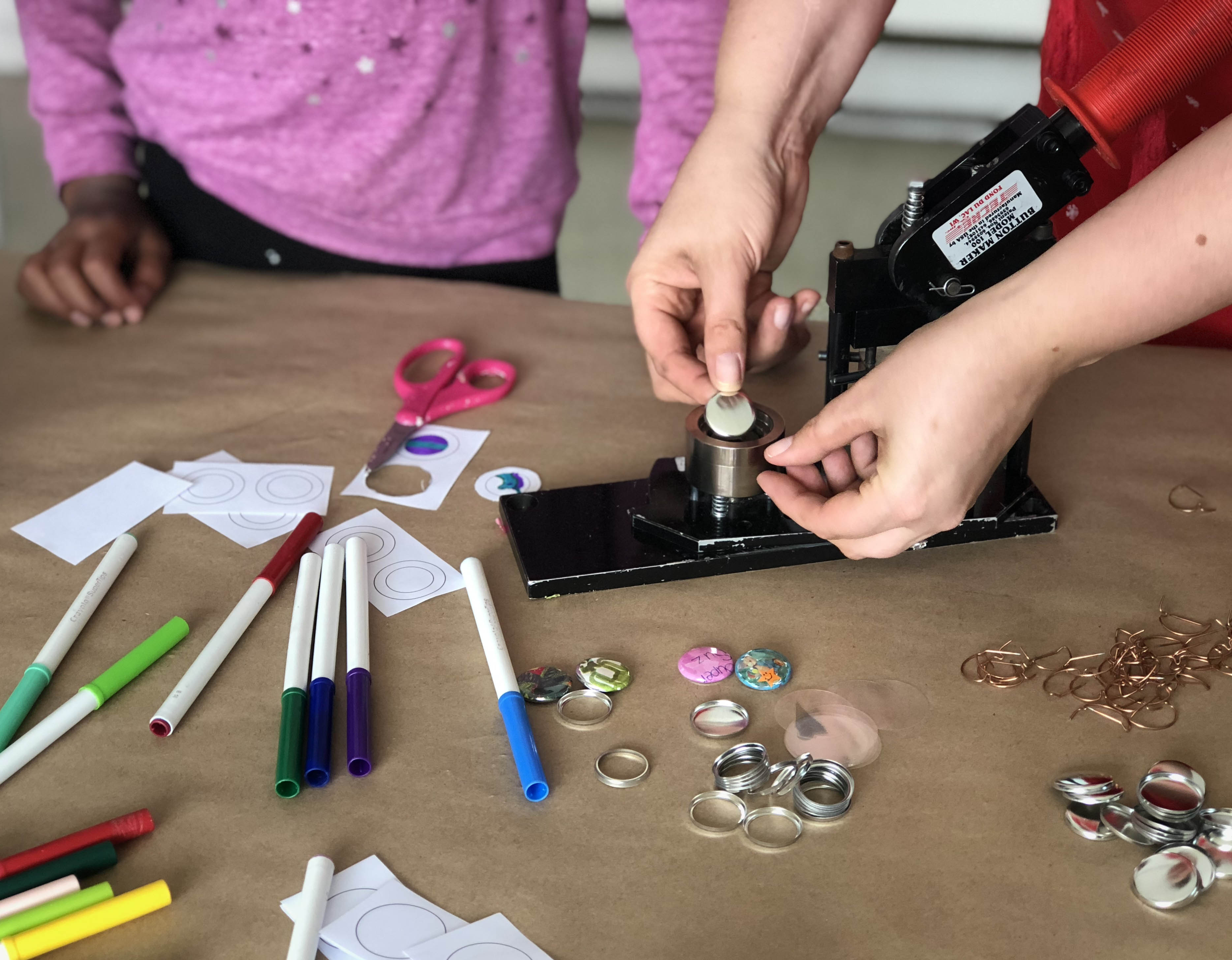 Our Education team will be at the Oakville Children’s Festival this weekend with a button-making workshop for kids of all ages, walking participants through the steps of turning an art idea into something wearable.

Pin-back buttons have their origins dating back to the 18th century, when buttons with messages and images in support of social and political causes and campaigns started to be mass-produced. Buttons quickly became a way of demonstrating one’s political allegiances in everyday social situations. Today, buttons are as likely to be aesthetic pronouncements as they are political ones. We’re looking forward to pressing pins of all varieties with kids this weekend—whether they want to make their thoughts on the environment known or just rock a glittery unicorn on their backpack. Whatever statement they’d like to make, participants will be provided with all the supplies they need to translate their ideas into wearable form. No registration necessary—just drop by!

For more information on this year’s Children’s Festival, visit oakville.ca. 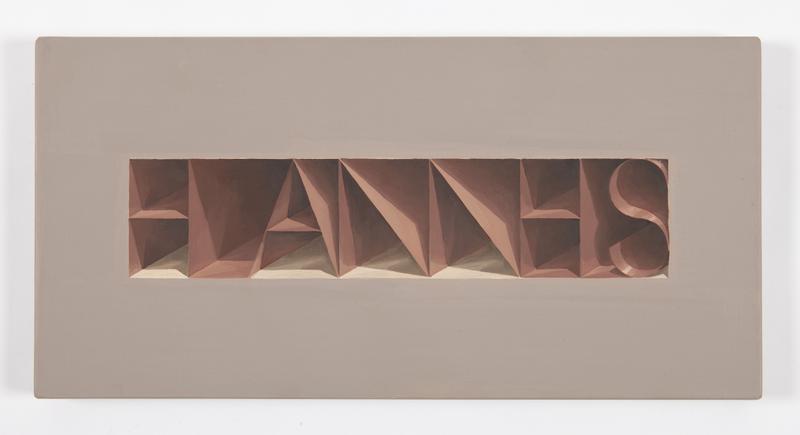 On the heels of opening our summer painting show, An Assembly of Shapes, we’ve been thinking about the outstanding work of Toronto artist Robert Fones a lot these days, whose current retrospective at the Art Museum at the University of Toronto is a must-see. This painting, Flannels (1994), is held in Oakville Galleries’ collection, and exemplifies Fones’ canny approach to parsing out the forms that animate our everyday lives. Here, Fones uses his signature trompe l’oeil painting technique to render the work’s title, itself sourced from Catharine Beecher and Harriet Beecher Stowe’s, The American Woman’s Home, a nineteenth-century book on household design. In their tome, the word “flannels” appears on a diagram for a domestic organizing system—however, the word is plural and unclear: it could describe a napped woven cloth as readily as long dress trousers. Fones’ representation of the word is similarly ambiguous, hovering between two and three dimensions, occupying a single plane but offering the meticulous illusion of a relief sculpture. 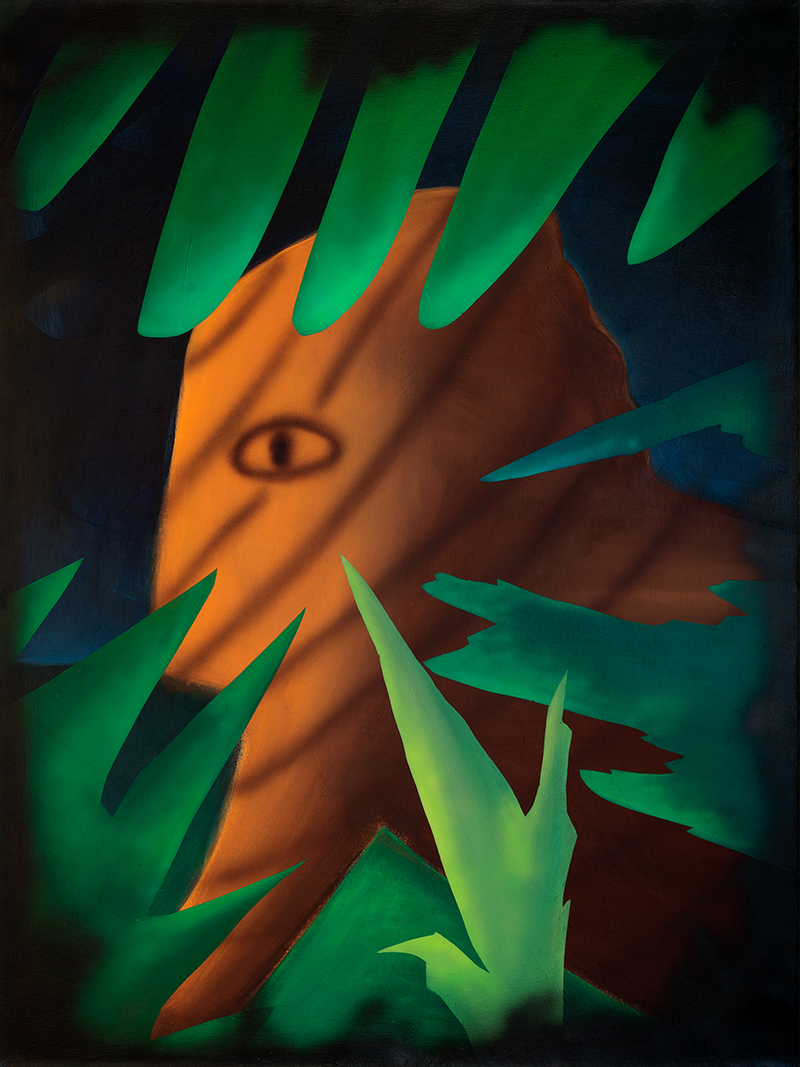 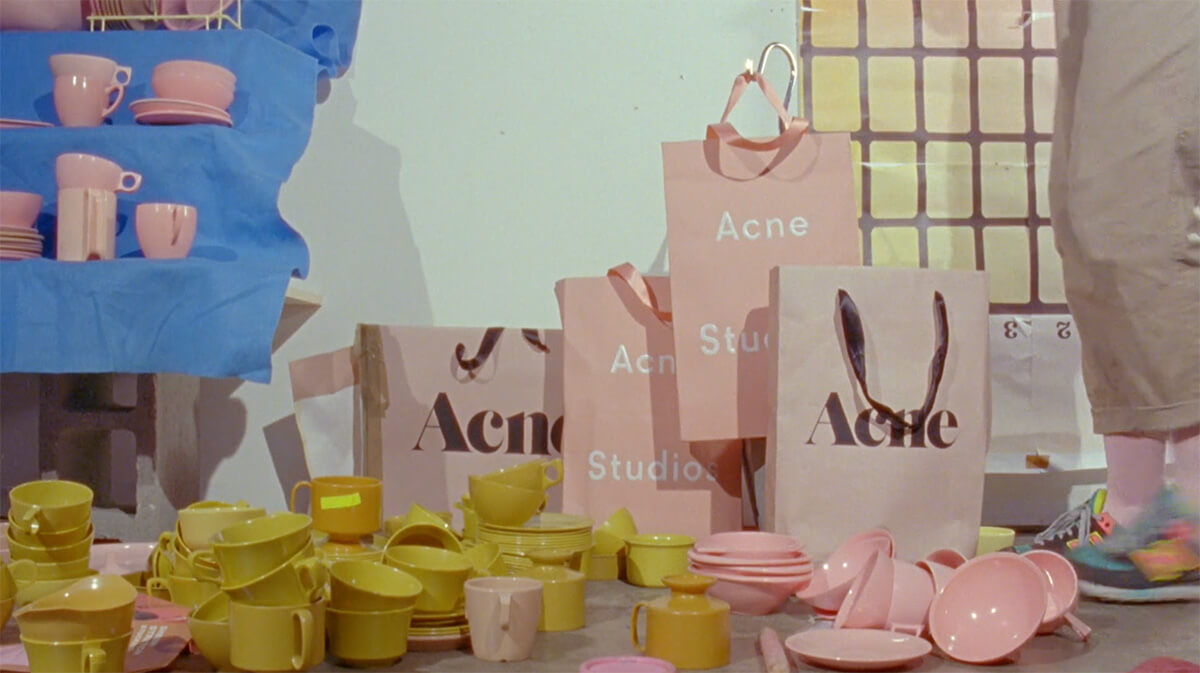 Read Sheila Heti’s brilliant essay on Sara Cwynar’s work, “Should Artists Shop or Stop Shopping?” on Affidavit. This piece was originally written and presented as a talk for our Authors on Art series, held in partnership with the Oakville Public Library. 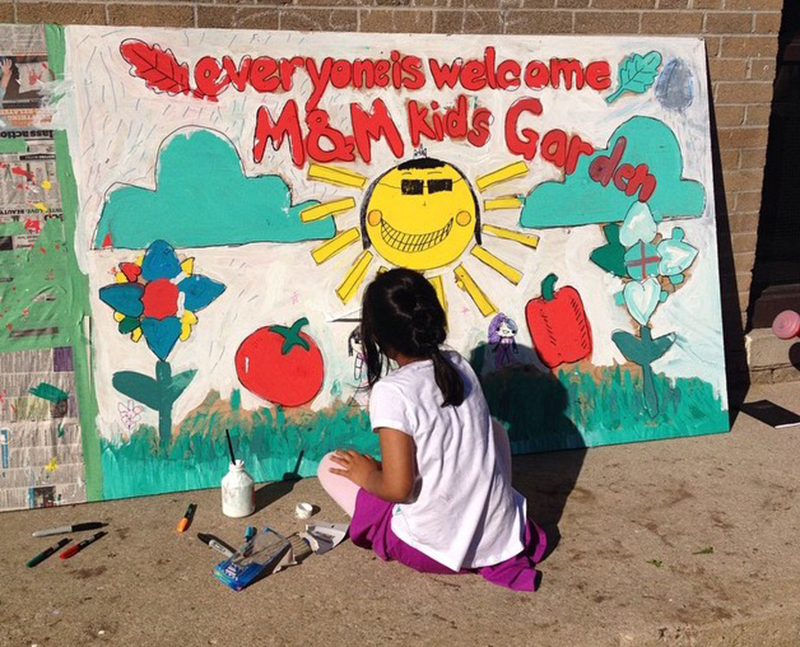 These days, Oakville Galleries spends as much time delivering programs off-site as we do at our gallery spaces. While our bricks-and-mortar home will always be at the heart of our mandate, we’re also dedicated to ensuring that Oakville’s the kind of place where art gets to exist well beyond the museum walls.

Most of these programs are directly inspired by the incredible local organizations—from libraries and hospitals to seniors’ residences and community foundations—that we partner with in the shared goal of bringing art to all corners of our community. This spring, we’ll launch three new programs with ArtHouse, our longest-term offsite programming partner. Since 2009, this partnership has seen us deliver free art workshops to over 1,200 kids, largely in lower-income communities. Instead of offering the old standards of art education, these programs are designed around the needs and interests of the kids we serve. That means we’re often learning alongside our participants, reshaping our programs on the fly to ensure kids are given as much space as possible to discover, experiment and play. This spring marks nearly seventy-five programs with ArtHouse—amongst dozens of other community initiatives. We look forward to the next seventy-five! 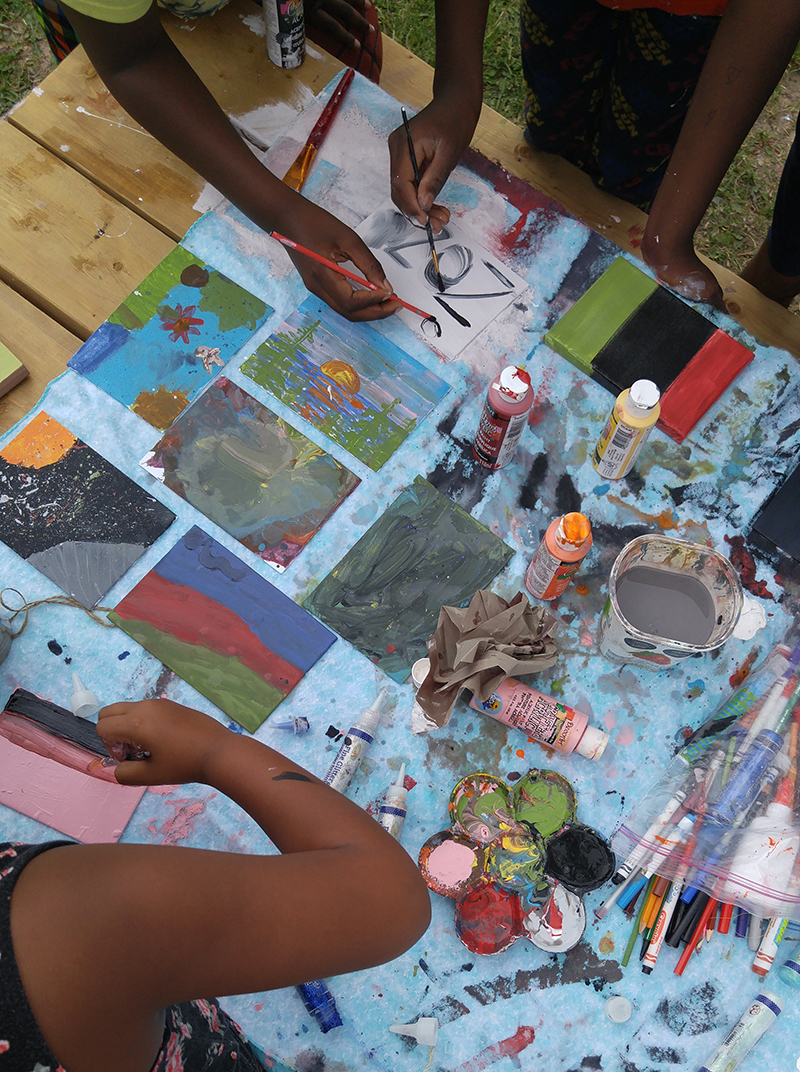 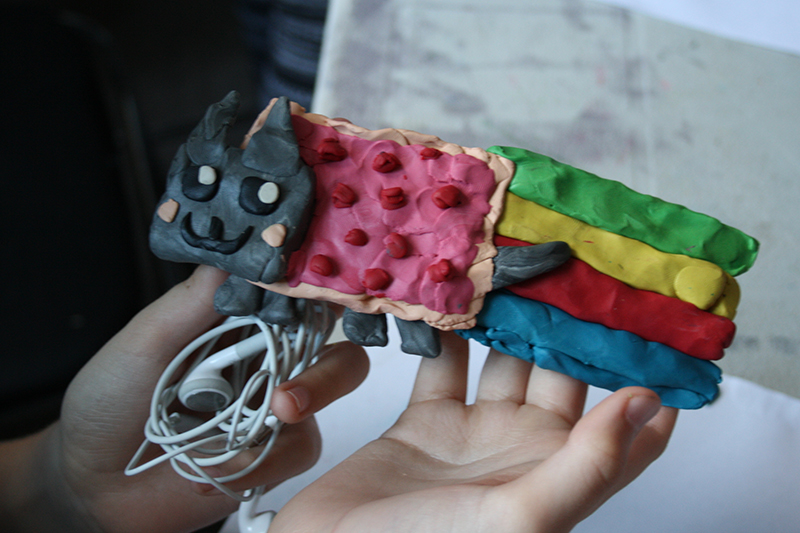 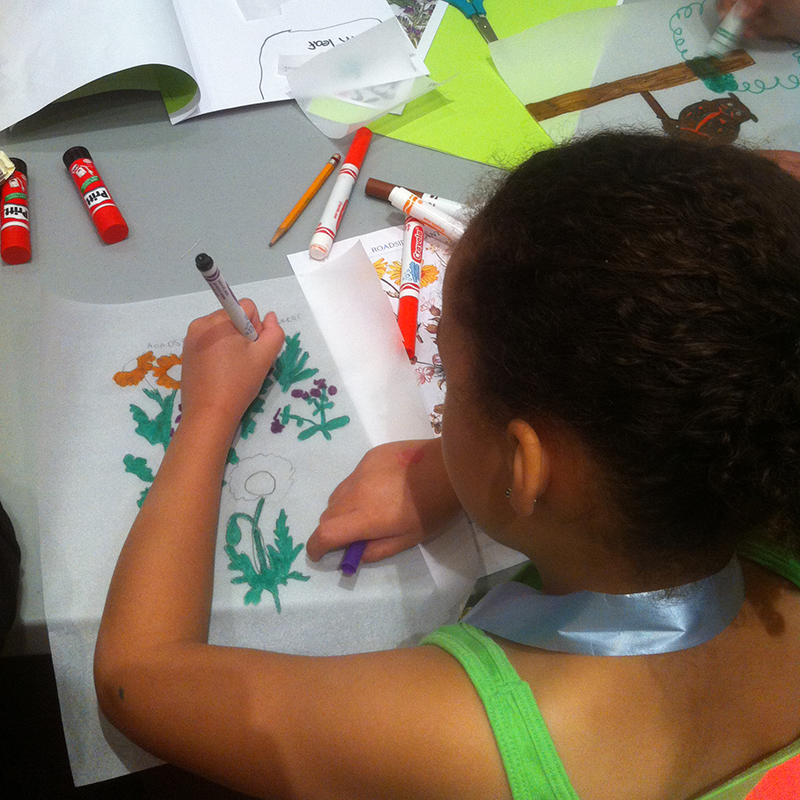 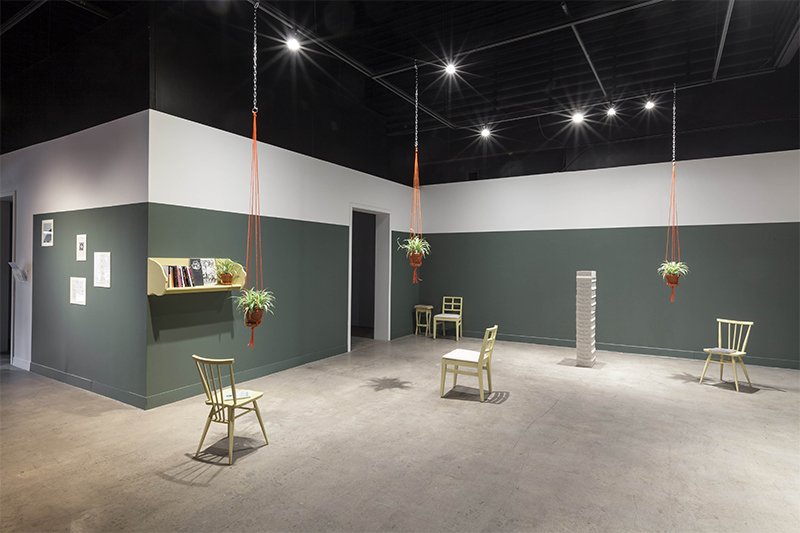 Throwing back to Ulrike Müller’s terrific Herstory Inventory (2009–2013) this International Women’s Day. This iteration of Müller’s project was installed as part of After My Own Heart at Oakville Galleries in spring 2013. Müller invited 100 feminists, queer artists and other interested people to create new images based on text descriptions of feminist t-shirts found on an inventory list at the Lesbian Herstory Archives in Brooklyn. Müller presented ten of these original drawings at Oakville Galleries—relating to books, shoes and non-normative cultural desires—along with Gathie Falk’s Standard Shoes, The Column (1998–1999) from our collection.

Installation view of After My Own Heart at Oakville Galleries at Centennial Square. Photo: Toni Hafkenscheid. 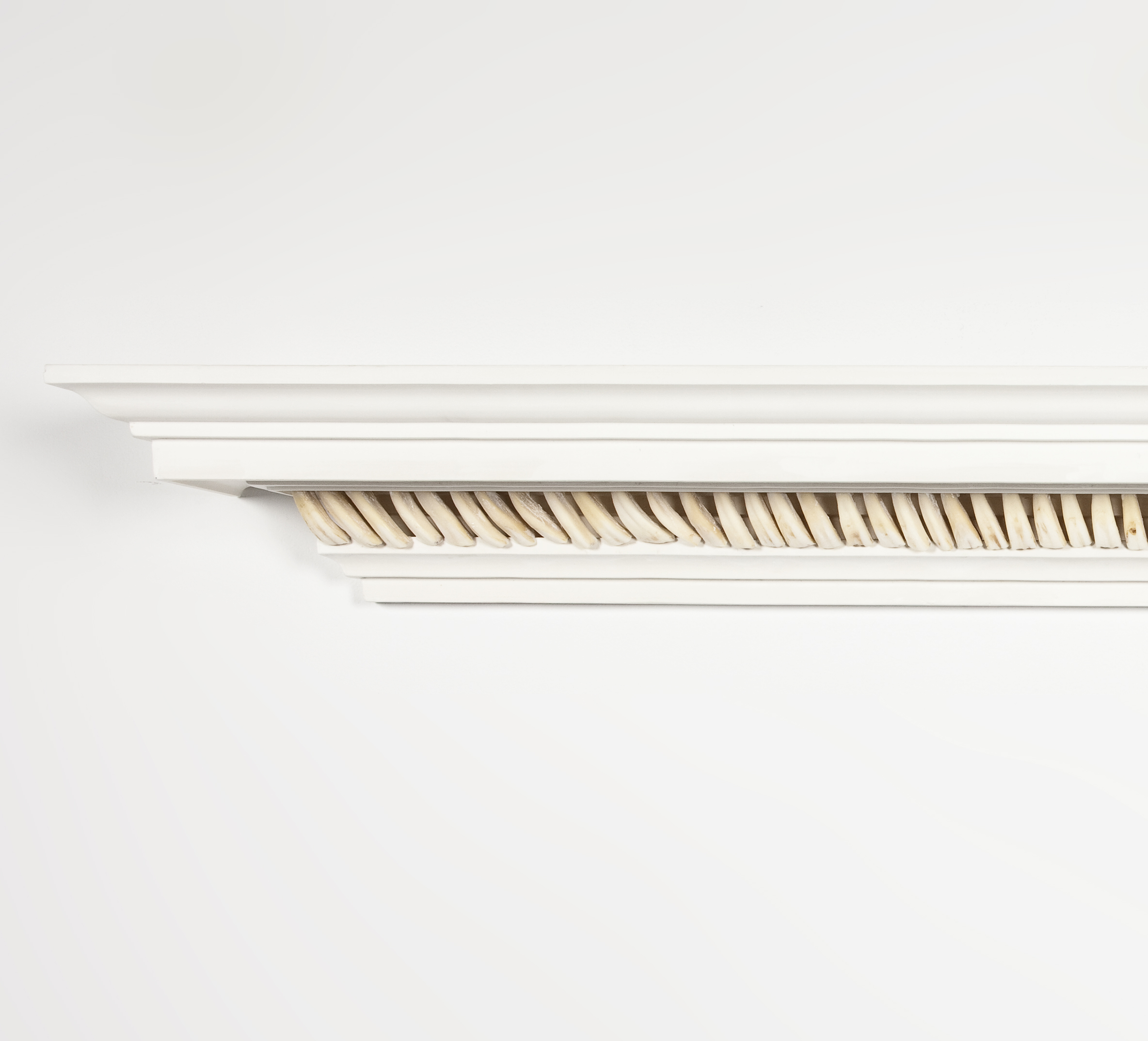 This week the great Spring Hurlbut—along with 7 other deserving laureates—was awarded the Governor General’s Award in Visual and Media Arts. This shot is a detail of a terrific early work of Spring’s—Dentil Entablature (1989)—that was acquired by Oakville Galleries twenty-five years ago. The title of the piece refers to dentils, the repeating block- or peg-like ornaments that regularly adorn classical entablature (the wide horizontal feature that sits atop columns often found on courthouses or municipal buildings, for example). In their stead, Hurlbut cleverly offers us dentals—horse teeth—objects once central to pagan sacrificial rites. Drawing parallels between decorative articulations of “civilization” and their roots in natural, ritualistic or ancient forms, Hurlbut guides us, as ever, toward the origins of things, toward the impulse to conventionalize, intellectualize or otherwise eschew those most primordial aspects of our history and being. 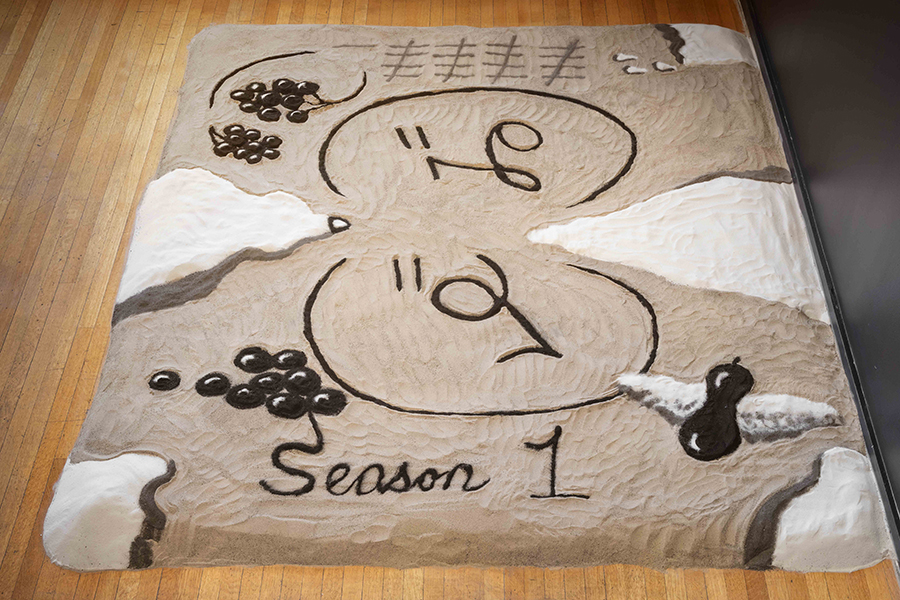 In Allison Katz’s current exhibition Diary w/o Dates, references to seasons, calendars, clocks, and diary-writing abound. Rather than an exacting chronology, Katz’s works—and their installation—explore how time feels.

In the lead-up to the exhibition, staff in the curatorial office read Marc Wittmann’s book Felt Time, published by MIT Press. In the book, Wittmann takes up recent scientific discoveries that shed light on our understanding of subjective time, exploring how our bodies create a basis for feeling the passage of time, how our perception of time impacts our decisions, and why time seems to speed up as we age.

As Wittmann writes: “We are time.” Our perception of time, its duration and its passing has a profound impact on our experience. My grandmother, for example, celebrated her birthday on the wrong day of the year for her entire life due to a mistranslation from the Jewish calendar when she immigrated to Canada as an infant. A few years ago, my dad proudly announced he had calculated the “true” date, but it was too late, she told him: she already had a birthday.